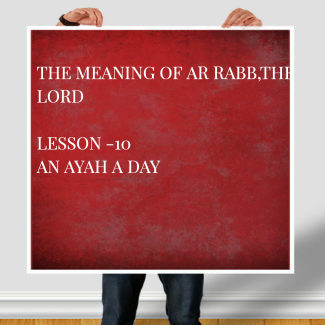 “AN AYAH A DAY KEEPS THE SHAITAAN AWAY”

In the Name of Allah(swt) the Most Merciful and the Most Beneficial”.

AN AYAH A DAY

THE MEANING OF AR-RABB, THE LORD

🔹Ar-Rabb is the owner who has full authority over his property. Ar-Rabb, linguistically means, the master or the one who has the authority to lead. All of these meanings are correct for Allah. When it is alone, the word Rabb is used only for Allah. As for other than Allah, it can be used to say Rabb Ad-Dar, the master of such and such object. Further, it was reported that Ar-Rabb is Allah’s Greatest Name.

🔹Al-`Alamin is plural for `Alam, which encompasses everything in existence except Allah. The word `Alam is itself a plural word, having no singular form. The `Alamin are different creations that exist in the heavens and the earth, on land and at sea. Every generation of creation is called an `Alam. ﴿رَبِّ الْعَـلَمِينَ﴾  (The Lord of the `Alamin), “Every type of creation is an `Alam.”Alam encompasses everything that Allah created, in this life and in the Hereafter.”

🔹Al-Qurtubi commented, “This is the correct meaning, that the `Alam encompasses everything that Allah created in both worlds. Similarly, Allah said,  (Fir`awn (Pharaoh) said: “And what is the Lord of the `Alamin” Musa  (Moses) AS said: “The Lord of the heavens and the earth, and all that is between them, if you seek to be convinced with certainty”) (26:23

WHY IS THE CREATION CALLED ‘ALAM

🔹`Alam is derived from `Alamah, that is because it is a sign testifying to the existence of its Creator and to His Oneness.”

🔹Al-Qurtubi said, “Allah SWT has described Himself by `Ar-Rahman, Ar-Rahim’ after saying `the Lord of the Alamin’, so His statement here includes a warning, and then an encouragement. Similarly, Allah SWT  said,  (Declare (O Muhammad ) unto My servants, that truly, I am the Oft-Forgiving, the Most Merciful. And that My torment is indeed the most painful torment.) (15:49-50)

🔹Allah SWT said, (Surely, your Lord is swift in retribution, and certainly He is Oft-Forgiving, Most Merciful.) (6:165)

FOLLOW NOW TO GET THE DAILY AYATH DIRECTLY IN YOUR MAIL BOX & INVITE YOUR FRIENDS & FAMILY MEMBERS TOO! IN SHA ALLAH

We have embarked upon a new journey of learning AN AYAH A DAY & I request you all to keep the same decorum & enthusiasm in learning our deen.

May Allaah accept it from us & you all.

Sharing Islamic posts will get you Sawab e Jaria. So share it now via

Assalamualaikum warehmatullahi wabarakatuhu. My name is Syeda Shurukh Hussain. I live in the Netherlands & I have a small Islamic team. Alhamdulillah! We translate English Islamic books into Roman English:Urdu. In sha Allah! We are making an only Roman English:Urdu Islamic website. You can visit the website at www.shurukh.nl.You will be able to see hadtih books, Holy Quran & Biography of Prophet Muhammad(pbuh) on the website. In sha Allah! To get in contact with me you can send me an email on info@shurukh.nl . Jazak Allah Khair. Stay Blessed!