Salat-ul-Qasr means the shortening of prayers usually offered when on a journey. The Quran says, *“And if you travel in the land, there is no sin on you that you shorten your prayers (taqṣurū min al-ṣalāt) if you fear that the unbelievers may harm you.”* [An-Nisa’ 4:101].
Even though the verse mentions ‘fear’ as a condition, it is no longer a requirement. ʿUmar bin al-Khattab(Radhi Allahu Anhu) was asked how it was still permissible to shorten prayers even though there was no ‘fear’ remaining. He replied, “I asked the Prophet (Sallalahu alaihi wasallam) the exact same question, and he said, *‘that is a charity that Allah has given to you, so accept His charity,”* [Muslim]. 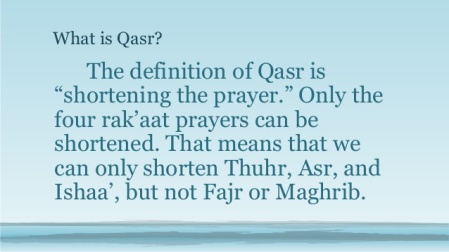 Note: There is some disagreement in the matter which arises from the Ulama calculating the distance which can be travelled in 3 days (or 1 day) rather then the distance (itself) which is stipulated in the Hadeeth.
Note: Dhul-Hulaifa is outside of Madinah. 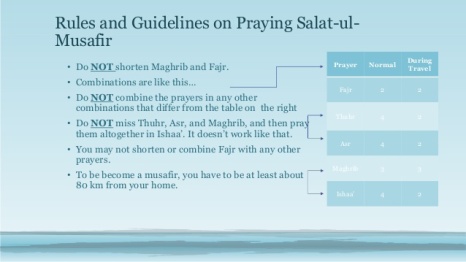 Note: There is some disagreement in the matter and other periods (19 days, 17 days, 10 days etc.) are also mentioned , therefore the Hanafi Ulama have adopted the middle period as mentioned in the Hadeeth above. 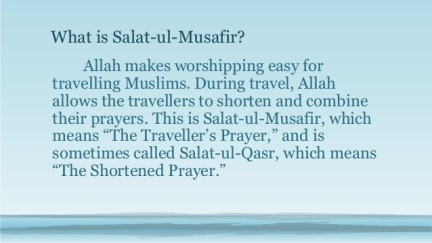 *BECOMING A MUQĪM (RESIDENT)*
*PRINCIPLE:* A musāfir will not become a muqīmuntil he firmly intends to stay at a place for a period of fifteen days from the time he makes this intention.
Witr salāh is wājib. Hence it must be offered whilst on a journey as well. If it is missed then qadā’ must be made.
Sunna Salāh should not be unduly missed during the journey. However if the musāfir is in a hurry then, apart from the Sunna of Fajr, it will be permissible for him to omit the other Sunna salāhs. If he is not in a hurry nor does he fear his companions leaving him behind (for e.g. when he is comfortably residing for a number of days at a place) then he should offer all the Sunnah Salāhs.
There is no reduction in the number of raka‛āt of Sunnah salāh.
It should not be misunderstood that Sunna or Nafl salah cannot be offered whilst on a journey. This is not true.
You can also watch the video:
Jazak Allah khair!

Sharing Islamic posts will get you Sawab e Jaria. So share it now via

One thought on “Salat Ul Qasr: Shortening of Prayers”

Assalamualaikum warehmatullahi wabarakatuhu. My name is Syeda Shurukh Hussain. I live in the Netherlands & I have a small Islamic team. Alhamdulillah! We translate English Islamic books into Roman English:Urdu. In sha Allah! We are making an only Roman English:Urdu Islamic website. You can visit the website at www.shurukh.nl.You will be able to see hadtih books, Holy Quran & Biography of Prophet Muhammad(pbuh) on the website. In sha Allah! To get in contact with me you can send me an email on info@shurukh.nl . Jazak Allah Khair. Stay Blessed!